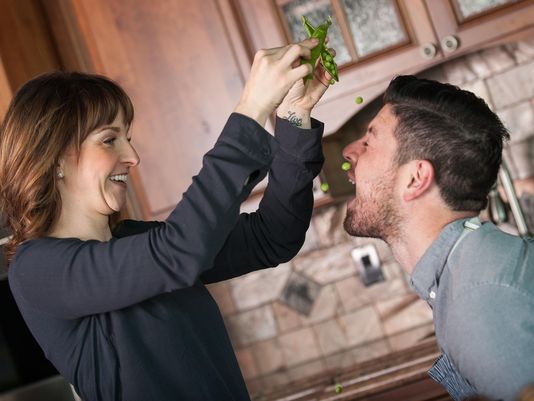 Just reminiscing on this awesome story the RGJ wrote about Blend when we made the leap to change our name from Dough to Blend Catering. Check out the story below!

We shouldn’t have done it. Why did we do it? We’re not doing it. We’re going back.

Josh and Whitney Deri were experiencing a particularly intense bout of buyer’s remorse a few weeks back.

The young Reno chefs (trained at the Culinary Institute of America) and food-forward caterers had just decided to change the name of their company from Dough Catering to Blend Catering with the assistance of a design and marketing firm. But then came the doubts.

Since October 2013, Dough had built a reputation for offering intensely flavored, carefully crafted food that ranged from humble to haute, from pulled pork sliders to coriander-cured foie gras dabbed with huckleberry yuzu gel. But would the new name confuse folks, and would they take to Blend as they had to Dough?

“We went home and said, ‘Oh my God, we can’t change. We can’t do it. We have to stick with Dough. Everyone knows Dough,’ ” Whitney Deri recalled. “We freaked out for two weeks.”

But then the reasons for the change overcame the doubts. “There were some restrictions with the Dough name,” Josh Deri said.

“Many people thought we just did baking. When we would meet with a potential client, we often had to explain what our name was not before getting to who we are and what we do. The pros of the new name so outweighed keeping Dough. With this new name, we feel we have a new business opportunity and new freedom to move ahead.”

Such freedom doesn’t come without the challenges always attendant when a business changes its name.

“Naming is a difficult art. You have to understand how people perceived the old one and how you want people to perceive the new one, and when you choose a new name, you have to change everything that goes with it,” said Larry DeVincenzi, a principal in the Biggest Little Group, a Reno advertising, marketing, public relations and digital services firm.

In the case of Blend Catering, “they had a great product before, and I think they have a great product now, so that makes things easier,” he said. “They had a brand disconnect with the word Dough, so kudos to them for being brave enough to make the change.”

But why Blend, which some might argue is equally as generic as Dough?

“I think it represents us on different levels,” Whitney Deri said. “We are a blend of two people (they are recently married). We like to blend ingredients, techniques, cultures. We like to pull from these areas. We felt it described us personally and our business.”

That business recently grew with the acquisition in late April of Perfect Pear Catering and its bookings to that date, including about 50 weddings.

“How better to get the new brand out there?” Whitney Deri asked. “We can use the events Perfect Pear had already contracted as a platform to show the brand.”

New bookings aren’t the only growth at Blend Catering. The company’s first employee beyond the founders just came aboard.

“She allows us to meet with people and new clients, whereas before, we had to stop our production before we could take that meeting or go pick up produce,” Josh Deri said. “We were having to turn work away because we couldn’t handle the workload. Now, our new employee can do an event. The amount that gets done is doubled, tripled, because we’re not doing everything ourselves anymore.”

The next goal, Whitney Deri added, “is our own commercial kitchen and event space and full garden so that everything can be done in house. It could be sooner than we think. Just six months ago, we didn’t think we’d hire anyone for at least a year and a half.”

Weddings constitute a large slice of Blend Catering’s business. At least 70 have been booked through the summer high season. These gigs open a window onto trends in wedding food and drink.

Full bars (and their license to over-imbibe) have been eighty-sixed by many couples in favor of a specialty cocktail. Southern food is big now (Blend does corn bread in mini skillets, for one). Vegetarian and vegan guests are being accommodated more than ever. “Couples say, “How do we make a meal for them that tastes great and not just let them eat sides?’ ” Whitney Deri said.

Olive-oil poached halibut with English peas and foraged Sierra onion sauce is a test dish that might appear on a future Blend Catering menu. (Photo: Chris Holloman/Special to the RGJ)

And at many weddings these days, the traditional, full-on, sit-down dinner has been replaced by a buffet or by a feast of appetizers. “It’s the new trend, apps only,” Josh Deri said. “Right when the ceremony ends, it’s nonstop passing the apps.”

You “start lighter, then maybe go into something fried, then mini entrées like braised short ribs with potato purée in mini bamboo boats,” Whitney Deri added. “It’s almost like you get to sample the full menu. We did all appetizers for our wedding. It really gets everyone up and mingling.”

In part because of the catering couple’s skill and creativity, some have assumed they specialized mainly in high-end food. “I’ve gotten that,” Whitney Deri acknowledged. “I think people used to think that, but that’s not what Blend is about.”

Beyond weddings, she pointed out, the company caters birthdays, graduations, baby showers, office confabs and other gatherings. “If we’re hired to do a kids’ pizza party, we’re going to make the best pizzas we can using great ingredients,” she said. “If you say you only have $15 a head, I can work with you. Why turn down a job?”

(Photo: Chris Holloman/Special to the RGJ)

Pop-up dinners, like the one June 27 at Frey Ranch (see cover), also belong to Blend’s repertoire. But these single-evening events are the closest Josh and Whitney Deri want to get to the restaurant biz.

“With catering, when you gain that trust of your clients, there’s so much more room for creativity,” Josh Deri said. “The overhead is so much smaller, and you don’t have to worry about filling that restaurant every night. We have absolutely no desire to open a restaurant.”

In a small pot, combine the cooked chickpeas, olive oil, water, tahini, minced shallot, minced garlic, cumin and coriander over medium heat. Stir to combine and cook for 5 minutes until warmed through.

Remove from the pot, add to a food processor or a blender, and begin to blend for a smoother consistency. With the machine running, add the lemon juice, yogurt and salt and blend until very smooth.

Serve the hummus at room temperature and garnish with the extra-virgin olive oil and a pinch of ground tarragon. Yields about 3 1/2 cups.

Salt and pepper, to taste

For vinaigrette and to complete:

Add the tomatoes, snap peas, avocado and jalapeño to a medium-sized mixing bowl and reserve.

Grill the ear of corn over high heat until golden brown, then remove and cool. Slice bottom end of ear to create a flat surface, stand ear on this end, and slicing downward, remove the kernels from the ear of corn and add to the mixing bowl. Season all of the vegetables with salt and pepper.

For the vinaigrette, combine the white balsamic vinegar; salt and pepper, to taste; and the honey. Whisk together while slowly incorporating the extra-virgin olive oil to form the vinaigrette.

Add the scallions, sliced chives and tarragon to the vinaigrette, mix in, then toss vegetables with vinaigrette.

Cover the bowl and let marinate for at least 15 minutes before serving. Serves 2 as a main-course salad, 4 as a side dish.